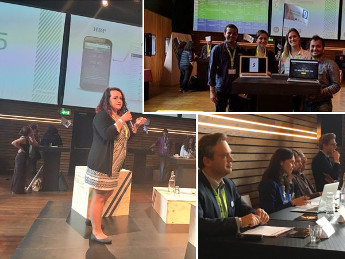 All across Europe dozens of teams have created applications using European Union open datasets, coming either from local, national or supranational government bodies. Thirty teams submitted an application for the online App Competition which took place from early January till May 1. Five teams were nominated to pitch their application at the TCampEU Unconference on June 1. They were joined by the winners of the eight local events organised across Europe.

At the Unconference they gave 90 seconds pitches in front of the audience followed by a TransparencyMarket where the teams gave live demo’s to the jury. The members of the jury were:

After much deliberation the jury decided that ConsiliumVote was the overall winner, receiving a trip to TransparencyCamp in the USA organised by Sunlight Foundation! The two runners-up prizes went to Inițiativa România and CityBikes. They, together with ConsiliumVote, win a special ‘Transparency Trip’ to Brussels and get to visit several EU institutions where they will be able to pitch to and discuss their application with a select group of data managers of European institutions.

Below follows a description of the 3 winners of the App Competition together with the 10 other contestants and links to notable competitors who were not nominated. 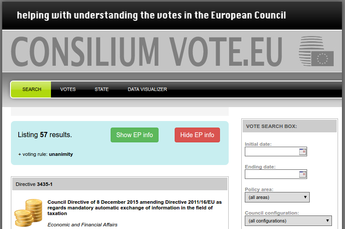 ConsiliumVote makes the votes of the Council of the European Union (i.e., all the executive governments of the EU’s member states) easily accessible. You can search or filter on policy area, date and much more. Click on one of the acts and you’ll see how each country voted! They took the effort to also include the voting of the European Parliament on the same acts. So, for example, you can see if the votes of the MEPs differ from their country’s government. Finally, they created an interactive data visualizer allowing you to explore the council votes more visually! 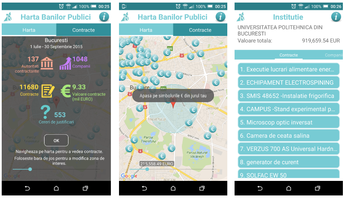 Harta Banilor Publici (Public Spending Map) is an Android app meant to offer information about public spending made by institutions in Romania. Currently it offers such information in Bucharest during the 3rd trimester of 2015 (July, August, September). The application shows contract related information (title, company, institution, signing date, value, category) and offers to the user the possibility to request more details about a contract that seems unjustified (e.g., a price higher than the market price). If a contract gathers more than 300 detail requests from the application’s users, Inițiativa România will ask for contract details to the public authority in question, based on the Romanian law nr. 544/2001. 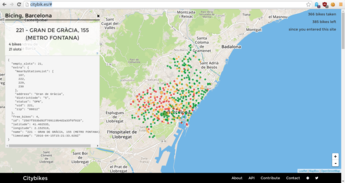 CityBikes is not an application but a project, about making bike sharing data available under the same format to any interested parties. On that sense, we both consume and produce open data. CityBikes is also an Android app, that displays bike sharing information on more than 400 cities all around the world. This app is Apache2 licensed, but sadly is not under active development, since we are investing most of our time running the API. The CityBikes API is used by more than 40 different apps on all mobile markets, including some funded by EU, or big players like CityMapper and Moovit. We also have pybikes, which is our own python library for accessing and making available under the same syntax all bike share feeds. Basically, pybikes is what allows us to run our API, and is available for anyone to build a similar project.

The other 7 teams below are listed in alphabetical order. 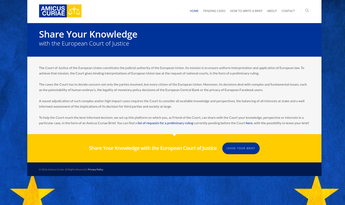 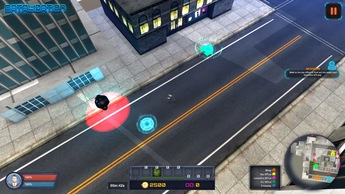 Datalization is a game that triggers EU citizens to easily discover EU Open Data, their usage in their life, their business and politics, by exploring a city in a funny way. The game focuses on the following pillars: public awareness and participation, competitive and sustainable growth, budget transparency and public servants accountability. 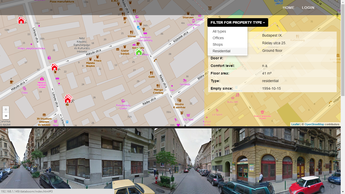 Our application is aiming to create an ecosystem for the most effective utilization of abandoned publicly-owned properties. For this purpose we tried to elaborate a workflow, which involves all the relevant stakeholders of a local community (namely the municipal government, the citizens and the enterprises). Based on the data provided by the district governments in Budapest, we created a data model which is capable of the visualisation of the abandoned properties, the needs of the citizens and the business plans of the enterprises in a complex, interactive application (GIS). 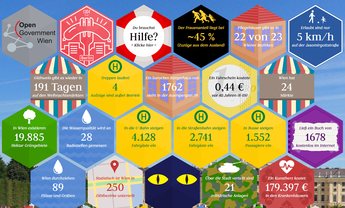 Data portals have been designed for a special target group: For nerds. Presentation, search and data formats are optimized accordingly. The average consumer cannot handle it. They do not know which data are available. To change this is the aim of “Daten-Waben” (Data honeycombs): colourful, modern, transparent and informative, it invites people to rummage through the diversity of data. Each data record is visualized as a hexagon – a honeycomb – and filled with information from the data record, supported by an appropriate optical background. Thus, honeycomb by honeycomb, a little story is told. 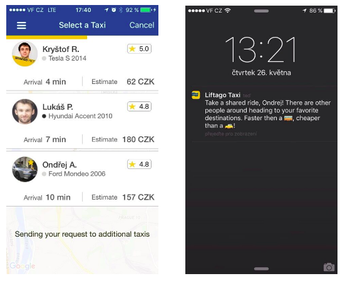 Liftago Rideshare connects passengers not just with available taxis but also with taxis that still have seats available, thus better utilizing taxis and saving 30-40% cost for each passenger travelling the same way. Liftago Rideshare makes taxis complement public transportation and provides an accessible alternative to owning a car. We’re using data from Prague public transportation stops (timetables and their location) and compare them with the data about our own demand for taxi rides in order to find out how much taxis and other public transportation complement each other and at what times. And potentially to notify users in case there’s a faster connection through a shared taxi ride with another passenger travelling the same direction – this could be done in places with low public transportation coverage (where people would normally take their own car), or high coverage but during overflow of demand for public transportation, or in case there’s missed connection – if our user agrees, we can use their favourite/frequent addresses and notify them in case there’s high probability of route-matching with someone else. 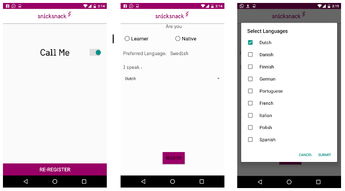 Over the last year, many people have engaged in integration activities, still many don’t find time or arenas for this. The snicksnack app is a possibility for those who struggle to find space in their agendas. The app connects a native speaker and a language learner for a phone call where they can talk about daily life in the local language. Sign up with your phone number/email, sign in to the app and slide ‘Available’. If someone else is available, you’ll get in contact for a call. People get matched together by proximity and if they have a second language in common. Talk as long as you have time and want to. After the conversation people can evaluate it and give feedback. Finally they are presented with facts about their new country retrieved from open data. 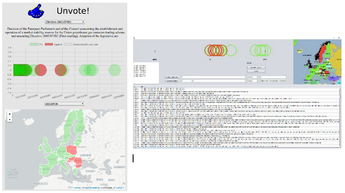 The following 3 teams are winners of their local events and pitched at the TCampEU Unconference but they did not meet the criteria (working prototype and use of EU open data) so they couldn’t compete for the prizes. 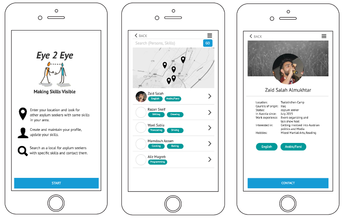 Eye2Eye is like LinkedIn but for asylum seekers & refugees. A platform that makes their skills visible and allows the local community to see how much human capital and potential they bring into their town, thus creating dialogue, interaction and reducing fears. It creates dialogue and shows the willingness of asylum seekers to participate, integrate and interact with the community. By showing their skills, the community can contact them for different leisure activities or events happening there, where they can volunteer. 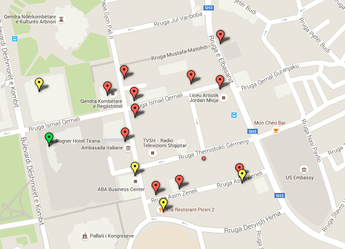 AccessHack is an interactive and community based application that shows the status of accessibility of our city and facilitate the access in public spaces for the disabled people. With such application we try to achieve the following:
– Denounce those public places that do not provide access for the disabled people
– Promote places that do provide such access
– Through the creation of a database containing this information also CSO’s would be able to push the government to take action
– It integrates the community since those making the mapping of the accessible locations or lack of, will be the community of the disabled people, their family and their peers 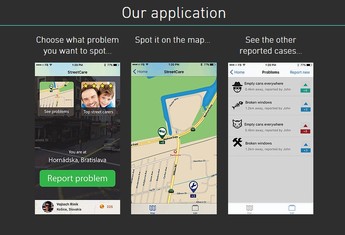 We are building our application around the existing FixMyStreet. There are several features that we added on top of the existing platform. First, we add the community element and allow people to up-vote the most pressing problems. Second, we add the gamification element, which allows people to gain ‘Street Points’ for reporting problems, badges for activity, and allow sharing their reports on social media. Moreover, one can see the most active neighbours in the area, who are recognized as ‘Top StreetCarers’. Third, we create a platform for cooperation with local NGOs that can solve many of the problems even without involvement of the city. This allows for a novel volunteering element, which further fosters formation of a community. Finally, our application envisages use of donations from businesses and corporations to fund positive improvement in the neighbourhood by local NGOs in exchange for a recognition as ‘socially responsible neighbours’. This makes our application not only socially useful, but also sustainable as a long-term project.

We also want to give a honourable mention the following 3 applications which were submitted for the online App Competition: